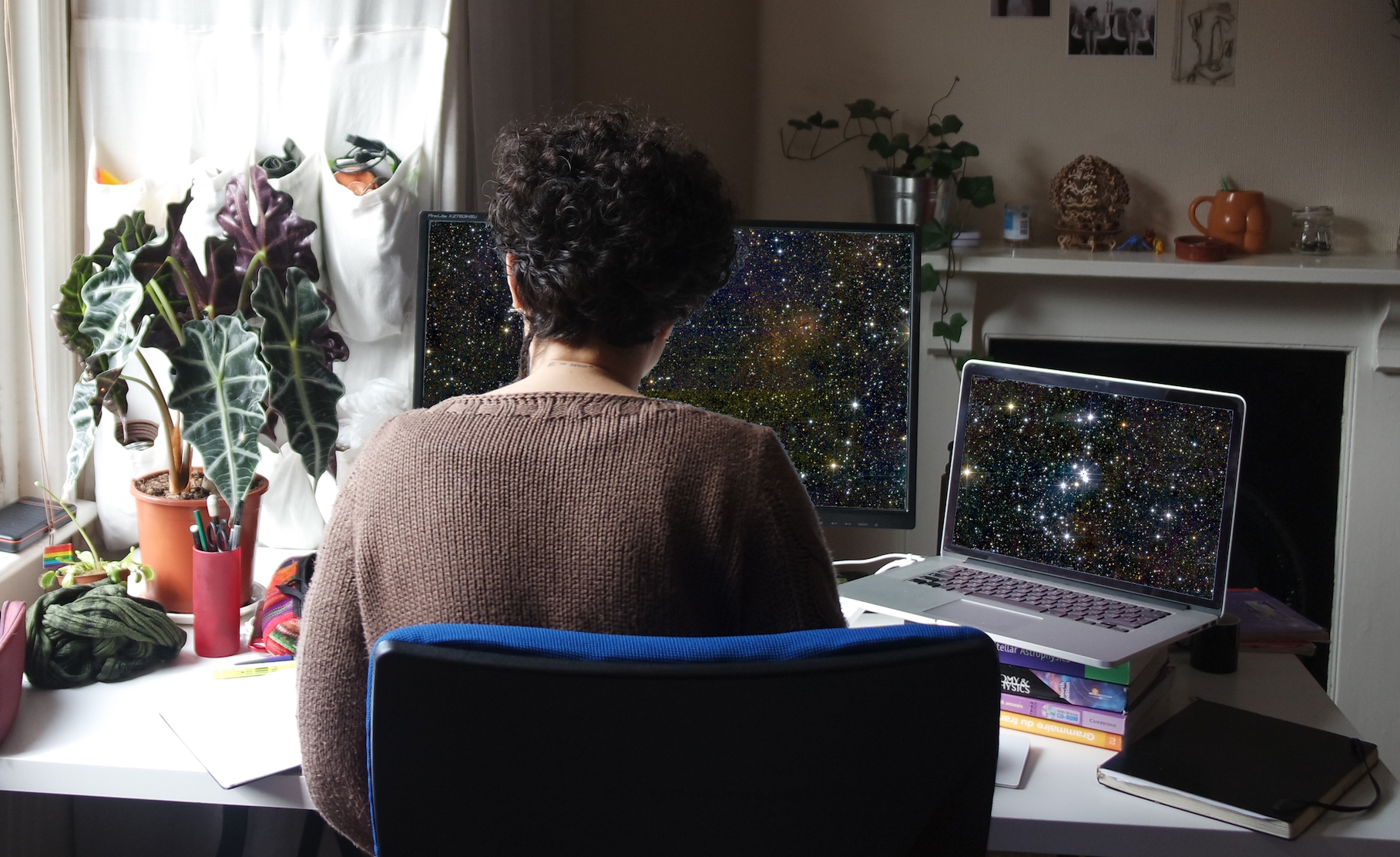 Sorry, this page is under construction.

The Spin Evolution of Stars in Clusters

Even though the vast majority of stars are formed and evolve in clustered environments, most rotational evolution models to date still consider stars that form and evolve in isolation. Trying to improve these models, I have been developing a rotational evolution model that considers how the environment of open clusters can influence the rotational evolution of low mass stars. In particular, I have been looking at how the presence of massive stars influences the local far-ultraviolet radiation fields in clusters, altering the dissipation timescales of circumstellar disks due to external photoevaporation.

Since 2018, I have been involved with the Monitor Project. As part of that, I have led the data-analysis of i-band light-curves and membership evaluation in the 35Myr old open cluster NGC 3766. Partial results of this project are published in the proceedings of the IAUS 354: Solar and Stellar Magnetic Fields: Origins and Manifestations (Roquette et al. 2020, Proceedings of the International Astronomical Union, Volume 354, pp. 200-203) The membership evaluation in this cluster is very challenging due to the location of the cluster in regards to the galactic centre, such as the cluster sequence in colour-magnitude diagrams overlaps with the location of field stars, introducing large field contamination. I have been currently working to improve membership using new data for this cluster released as part of Gaia eDR3.

Metalicity and Rotation in the Kepler Field

During my undergrad research and my PhD, I performed a survey of variability and rotation in the massive Cygnus OB2 association. The major outcomes of my PhD research were published in a paper at Astronomy&Astrophysics (Roquette et al. 2017 A&A 604 106R), where 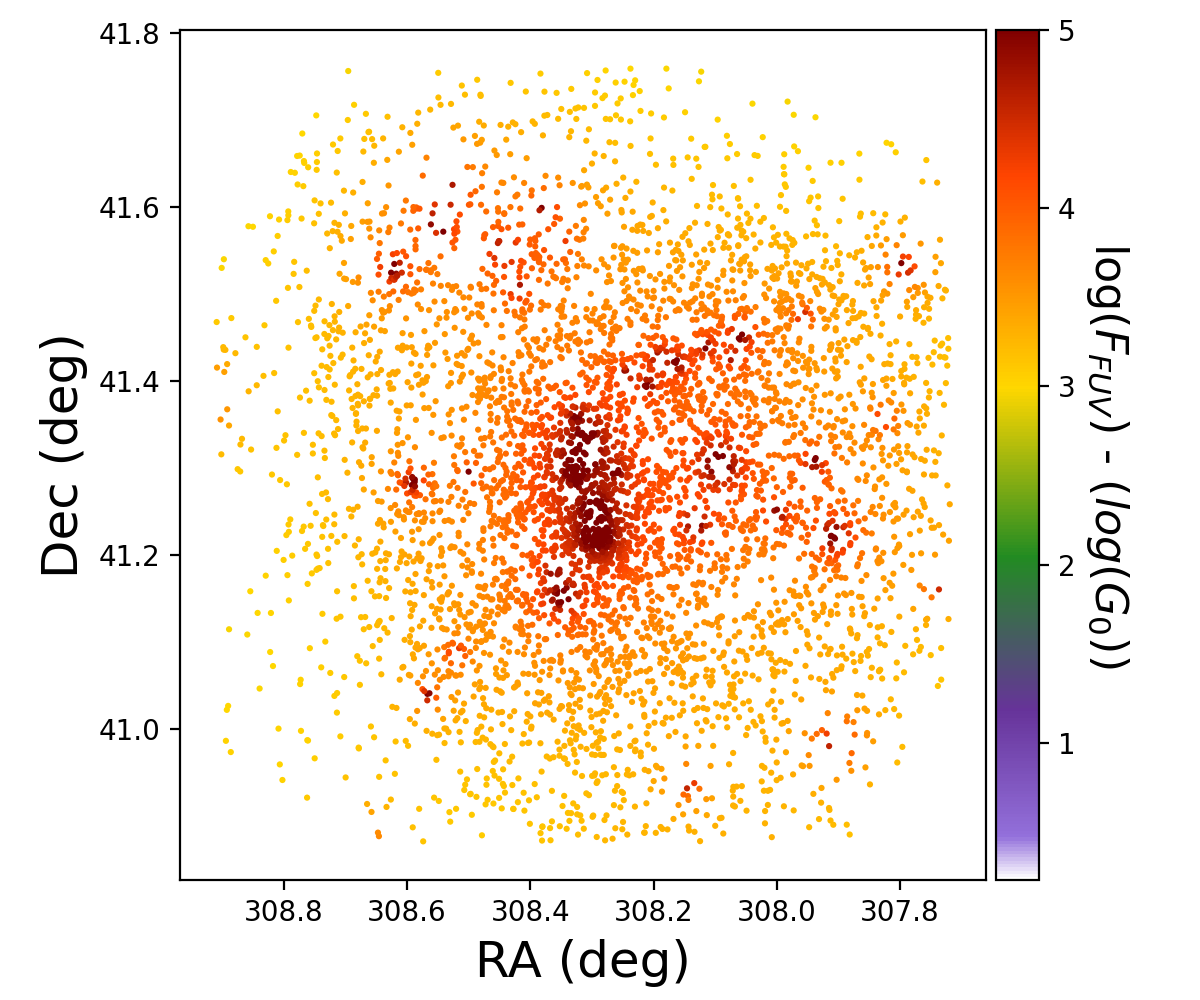 Variations in the far-UV local radiation in the Cygnus OB2 association. FUV fluxes were estimated using the luminosities of massive stars and 2D projections for the distances between OB stars an low mass stars.

where I identified 1224 periodic variable stars among the members of the Cygnus OB2 association. I found that 894 of these periodic variables could be characterised as spot-variability, which means their periods reflect the stars' rotational period. I explored this distribution of spin-rates in the context of the general scenario for the rotational evolution of young stars seen in other similarly aged regions. However, Cygnus OB2 association is a very particular young region. First, it is an OB association and shows no signs that it suffered significant dynamical evolution (Wright et al. 2014 MNRAS 438,639-464). Second, it has a very rich massive population with more than 169 OB stars (Wright et al. 2015 MNRAS 449, 741-760). Third, previous observations show that the fractions of stars with disks is shorter close to the massive stars (Guarcello et al. 2016 ArXiv). These three points motivated us looking beyond the comparison of rotational period distributions with the literature by further investigating possible observational evidence of environmental feedback on rotation. For that, we used the position and luminosity of the O-type stars in Cygnus OB2 to build far-UV maps of the association, using 2D projections of the distances between the stars (see plot on the left). We used the estimations of local far-UV flux obtained with these maps to compare the rotational properties of stars in regions of low and high far-UV. We found different statistical properties in the correlation between rotation and the presence of a disk and rotation for stars in high and low far-UV regions. Additionally to the paper, you can also read more about this project in my PhD thesis.

In 2020 I published a follow-up study about the Cygnus OB2 association. I used near-infrared light-curves to characterise the variability of members of the association, and I also investigated their variability in the color space. With this survey, I identified 14 eclipsing binary candidates in the region. I also took a deep look at the variability characteristics of the disk-bearing young stellar objects in the region. I tested the hypothesis that near-infrared variability could be solely used to identify disk-bearing stars, and I found that 53% of the known disk-bearing stars in the region could have been identified as such based on their variability. You can read more about this study in the published paper: Roquette et al. 2020 (A&A 640A 128R.